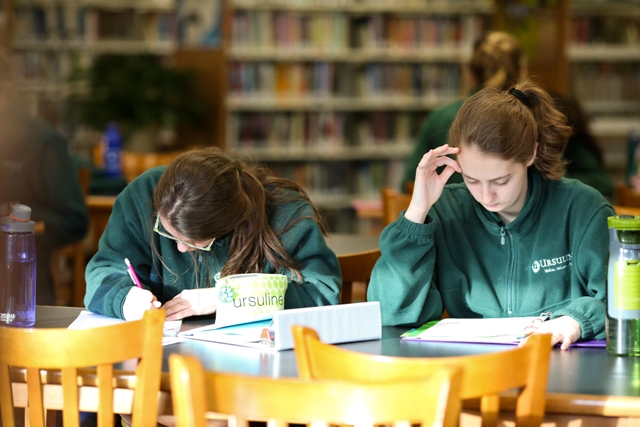 AP Courses are designed to reflect the academic rigor and workload of a college course. With successful performance on an AP Exam, students may earn college credit. Ursuline offers AP courses in the following areas of study:

Of the 164 members of the Class of 2019, with acceptances at over 155 colleges, 100% are continuing their education at more than 58 different colleges. The class received over $29 million in college scholarships, consistent with scholarship earnings over the years. The Ursuline Class of 2019 had the highest average scholarship award per student of the 23 high schools in the Archdiocese of Cincinnati.

The Linda Vester Ivy League scholarship program, which was made possible through the generosity of Linda Vester Greenberg ‘83 and her husband Glenn Greenberg, awards recipients $15,000 per year for four years of undergraduate Ivy League study. This scholarship program was established by Ms. Greenberg, herself a Fulbright Scholar and celebrated TV journalist, and her husband in 2001 to encourage qualified Ursuline students to attend Ivy League colleges. The idea came from Ms. Greenberg’s experiences as a student at Ursuline Academy when she learned how financially prohibitive it was for qualified students to attend Ivy League colleges.

The Scholastic Awards, presented by the Alliance for Young Artists & Writers, recognize creativity in the classroom. Students can submit work in up to 29 art and writing categories, including Drawing & Illustration, Digital Art, Design, Journalism, Poetry and more. Submissions are then viewed by a panel of individuals with distinguished experiences in the visual and literary arts. Panelists look for works that exemplify originality, technical skill and the emergence of a personal voice or vision.

23 Ursuline students were recognized with Scholastic Awards in 2019.

National Honor Society (NHS) is the nation's premier organization established to recognize outstanding high school students. At Ursuline, students with at least a 3.5 GPA are invited to apply, and then earn membership after a selection committee of Ursuline Faculty members reviews their applications. Induction is based on the four pillars of the National Honor Society: scholarship, service, leadership, and character. Ursuline has consistently inducted over 100 new members each year.